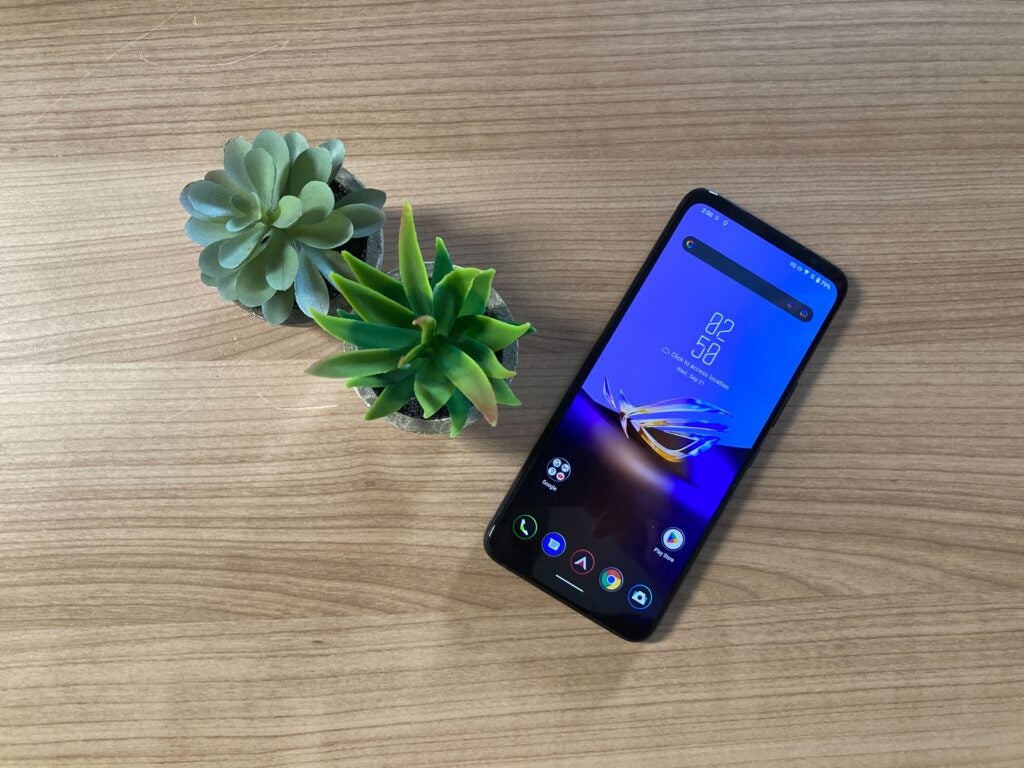 The newest gaming phone from Asus once again seeks to raise the bar for what’s possible from a handset purely dedicated to gaming does it succeed?

The ROG Phone 6D Ultimate boasts a litany of specs that would seem to make it an attractive prospect for the very keenest of mobile gamers.

From the super smooth 165Hz screen to the powerful MediaTek Dimensity 9000+ chipset and its elaborate cooling system, there should be plenty to keep gamers glued to; but how well does it work in practice, and is it the equal – or better – of the Asus ROG Phone 6 Pro? Read on for our early impressions after trying out this handset for the first time.

Just like the ROG Phone 6 Pro, this phone makes clear even from its appearance that it’s here for games and little else. With a gunmetal finish known as Space Grey (the only possible colour choice for this model), it’s accentuated with light blue highlights, various snippets of text, and most notably has a small 2-inch rear screen named the ROG Vision.

This secondary screen can display customisable graphics for various actions including incoming calls, when you put it on charge, when you’re playing a game, and more – with 60 animations available in total.

As for its robustness, the ROG Phone 6D Ultimate has an IPX4 rating (so is splashproof), and has Gorilla Glass Victus on the front and Gorilla Glass 3 on the back to protect against damage.

The most notable thing about the design, at least from early impressions, is simply its sheer size and weight; this is a really bulky, heavy phone (at 274g and 10.4mm thick), so it’s certainly anything but subtle.

The screen itself is a highly impressive panel, measuring a healthy 6.78-inches, offering a smooth 165Hz refresh rate and a highly responsive 720Hz touch sampling rate. These specs are key to getting the most out of your games, so that you can have a competitive edge over your adversaries.

In the limited time I’ve had with the phone, the display certainly seems to live up to expectations, being bright and very smooth even when just flicking through the user interface. We’re looking forward to seeing how it shapes up when we play through demanding games.

The performance is perhaps of primary importance when checking out a gaming phone, so I am hoping for very special things from this one.

Rather than using the Snapdragon 8 Plus Gen 1, as other models in this series have done, it instead runs on the MediaTek Dimensity 9000+. Built on a 4nm process, Asus has made some bold claims about the capabilities of this silicon. This chip apparently delivers a 5% faster CPU (with 3.2GHz maximum clock speed) and 10% faster GPU than its predecessor.

When it’s up and running, it will also count on the GameCool 6 cooling system to dissipate heat. Using the AreActive Cooler attachment (supplied in the box), there’s also a 30% larger vapour chamber internally, along with an enlarged graphite sheet in order to keep the temperature under control. In fact, it’s capable of reducing the device’s surface temperature by up to 25C when the most powerful cooling mode is working its magic.

There are two cells on board the ROG Phone 6D Ultimate, which offer a 6000mAh battery capacity between them. Dividing the cells was a choice made for a couple of reasons; to keep balance its considerable weight more evenly, and to produce less heat when in use and when charging.

While it’s a strong capacity for any phone, it has of course got a great deal of heavy lifting to do given the demands of the screen for instance, so I am going to have to run the usual tests on the battery to see how well it can hold up with intensive usage over the course of the day.

The 65W fast-charging also looks very promising, with Asus having claimed that it will charge fully, from 0% to 100%, in just 42 minutes.

The camera is never the primary reason to buy a gaming phone, but nonetheless having a good sensor onboard just in case you do want to capture a special moment and your ROG Phone is the only device that you have to hand is important.

There are three sensors on the rear of this phone, those being a 50-megapixel wide sensor, a 13-megapixel ultrawide lens, and a 5-megapixel macro camera. I don’t hold particularly high hopes for the latter of these, but we’re keen to see if the others can stand up to taking good snaps and video. Recording footage can be taken in up to 8K resolution at 24 frames per second, or 4K at 60 fps.

On the front of the phone, there’s a 12-megapixel selfie camera, and again we’ll have to see if this is up to taking good enough portrait pictures for your use.

The Asus ROG Phone 6D Ultimate is clearly all-in when it comes to attracting gamers, which is especially evident in the high-performance internals (and their associated cooling system), along with the high-spec screen that even boasts a 165Hz refresh rate. From our early impressions, these have all functioned rather well, although it’s too soon for us to give a final verdict.

However, I will also be keeping a keen eye on how some of the gaming-adjacent features stack up; for instance, whether the camera is worthy of such an expensive device, and how intuitive the software will be to use for all purposes.

We were certainly impressed with the Asus ROG Phone 6 Pro, so I am hoping that this highly similar handset can confidently follow in its footsteps.

Does the Asus ROG Phone 6D Ultimate have 5G connectivity? Yes, as long as you have a compatible SIM card and network coverage then you can get 5G data speeds. What colours is it available in? This phone is available in just one colour, Space Grey.

What is an eSIM and which networks use it?