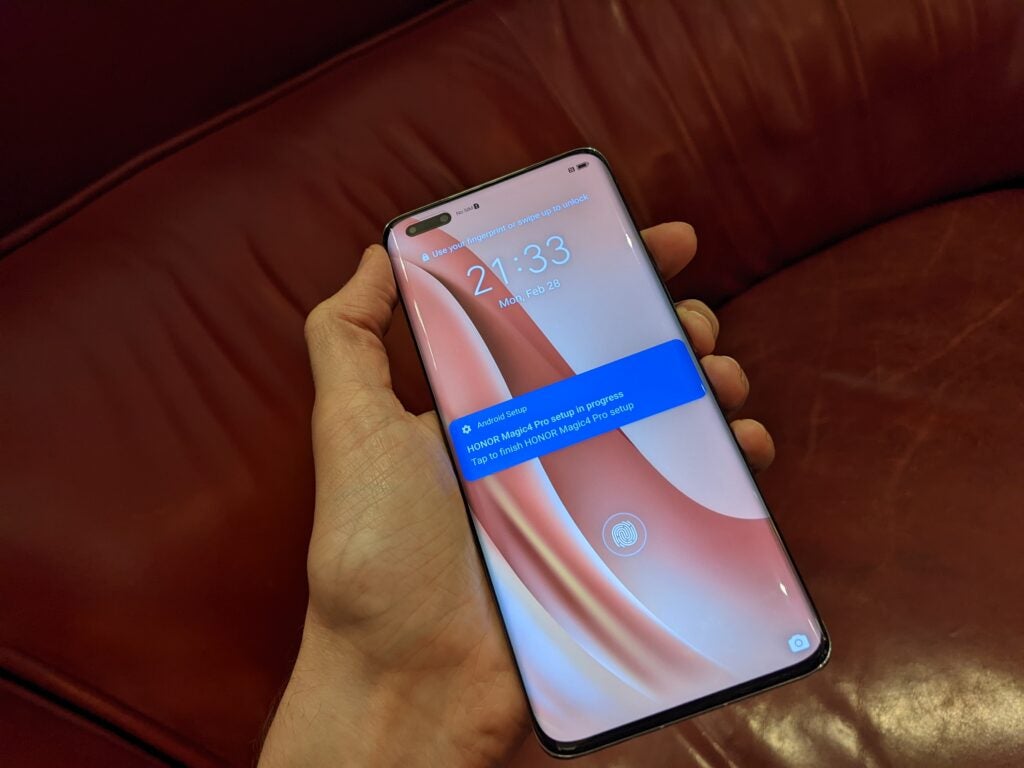 Honor’s first premium smartphone to launch globally is an impressive first step, offering a great screen and a promising camera.

Triple rear cameraThere’s a wide, ultrawide, and telephoto sensor in the rear camera module of this handset

Honor is best known for releasing good value mid-range devices such as the recent Honor 50. However, with the Magic 4 Pro it is aiming its sights at the premium end of the market.

Honor has had a bit of a resurgence since completely separating from Google. Not only has it managed to get Google Services and the apps that come with it back, but it’s been experimenting on higher-end products like the Honor Magic V.

The Honor 50 isn’t quite as innovative as the Magic V and sticks to a far more traditional form factor. However it remains a tempting prospect, especially with all that it offers.

This is the first phone from Honor’s premium Magic series that will be launched globally. The success of this device could well dictate whether or not the likes of the Honor Magic V will also be launched in the UK, Europe, and beyond.

Given that Honor is keen to make a good impression, the design left something to be desired for me.

The glossy rear panel picked up fingerprints like nobody’s business, looking relatively grimy after just a brief period of being handled (so you can imagine what it was looking like after a horde of tech journalists had had their way with it).

On top of that, it’s just very bulky when compared to the competition. A thickness of 9.15mm makes it fairly chunky, while the 215g is also noticeably hefty when put next to most other devices (aside from behemoths like the iPhone 13 Pro Max.)

That said, the glossy rear panel does look attractive when it shimmers in the light, as in the above photo.

The screen measures 6.81 inches diagonally and curves around the sides, giving it a 93.5% screen to body ratio.

The display comes with a resolution of 1312x2848p, a 120Hz maximum refresh rate, and support for over one billion colours. It’s got a relatively large cut-out for selfie sensors in the top corner, but otherwise provides a relatively immersive experience due to its size and smoothness.

As you can see in the above picture, the camera module looms large on the phone, dubbed by Honor the “eye of muse”. You can also see those aforementioned fingerprint smears in all their dubious glory.

In my brief time of using the device, I found that the camera performed well, delivering crisp images with plenty of colour. The digital zoom was also one of the best that I’ve used, retaining serviceable detail even for highly zoomed-in pictures.

The larger-than-usual selfie camera notch in the screen arguably justifies itself with the results as well, because the 12-megapixel front camera takes good portrait pictures with the help of its accompanying 3D depth sensor adding to the accuracy of its blurred background bokeh effect.

I’m looking forward to giving this camera a more thorough examination because it seems highly capable and versatile.

The performance and battery are two areas where the Honor Magic 4 Pro has the potential to excel, but naturally due to the constraints of my time with it, these are also the areas about which I have the least clear image.

The device runs on a top-class Snapdragon 8 Gen 1 chipset, the same one that you’ll find in many of this year’s best phones, so you should be assured that it will be able to deal with any of the apps that you throw at it. Naturally, however, we did not have the opportunity to run thorough tests on the device when we tried it out at MWC.

The battery capacity is 4500mAh, and given the physical size of the phone I was actually expecting a higher number. I have no idea of judging how well this will cope with day-to-day demands until I actually put it to the test, but one aspect of the battery certainly stands out and that’s the charging.

Rated at 100W not just for wired charging, which would already be incredibly impressive, but also for wireless charging as well, which is nigh-on unheard of, this device should be one of the very best in the game in this metric, and the manufacturer says that a 0-50% charge can be achieved in only 15 minutes.

The Honor Magic 4 Pro is a significant first step for Honor into the world of premium smartphones. This device is certainly feature-packed, and it could attract customers to the brand with its impressive camera system and attractive screen. However, I wasn’t the biggest fan of the design.

A ‘hands on review’ is our first impression of a product only – it is not a full test and verdict. Our writer must have spent some time with the product to describe an early sense of what it’s like to use. We call these ‘hands on reviews’ to make them visible in search. However these are always unscored and don’t give recommendations. Read more about our reviews policy.

The most common format for wireless charging and the one supported by the majority of devices. Charge speeds vary a lot by the phone.