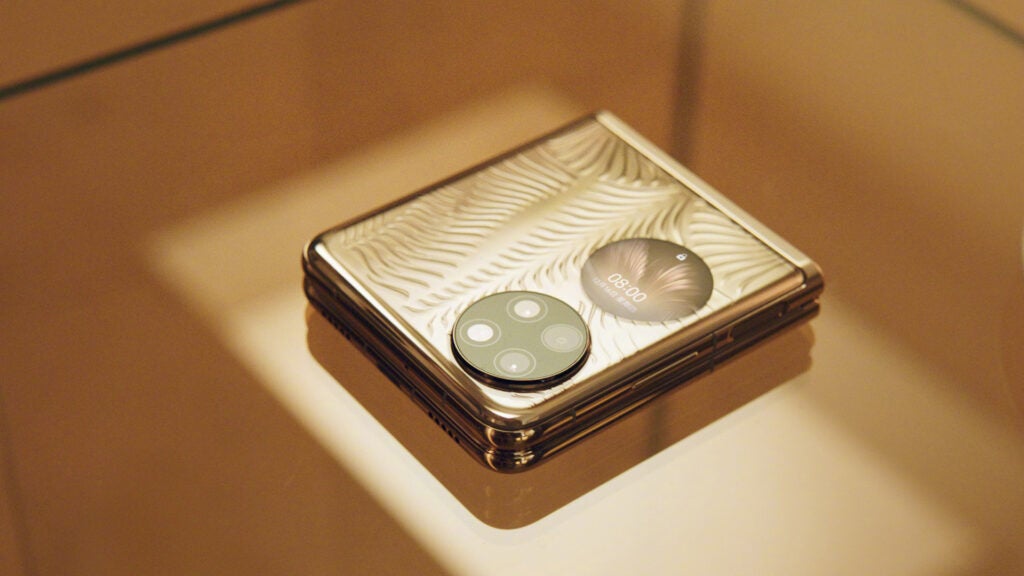 The Huawei P50 Pocket has had its compact foldable design revealed a full week ahead of its official unveiling, courtesy of a glossy fashion shoot.

Harper’s Bazaar China has posted a series of images of the petite smartphone on its Weibo account, confirming a clamshell form factor after various leaks and a deeply suggestive teaser, and revealing a highly stylised finish.

As you can see, there’s a striking two-circle motif on the outside of the device. While one is a camera module, the other is a small display that enables you to use the aforementioned main camera for selfies while the device is closed.

Besides those distinctive circles and a form factor that’s deeply reminiscent of the Samsung Galaxy Z Flip 3, the images reveal what appears to be a unique textured finish to the outer case. It looks rather like an ornate golden shell.

On a more practical front, that main angled shot seems to confirm that Huawei has gone for the same kind of side-mounted power button fingerprint sensor as the Samsung Galaxy Z Flip range.

The accompanying (Google Translated) text talks of “when fashion and technology collide”, which rams home the point that Huawei is looking to make a real visual impact with the P50 Pocket.

One thing we still don’t get is a look at the Huawei P50 Pocket’s display, so some things remain a mystery for the full official launch. We’re eager to see if Huawei has been able to come up with an even better hinge mechanism and a smaller display crease than Samsung.

Of course, the Huawei P50 Pocket is unlikely to be a massive going concern in the West, regardless of its design, owing to the ongoing lack of Google Play services on the company’s devices.