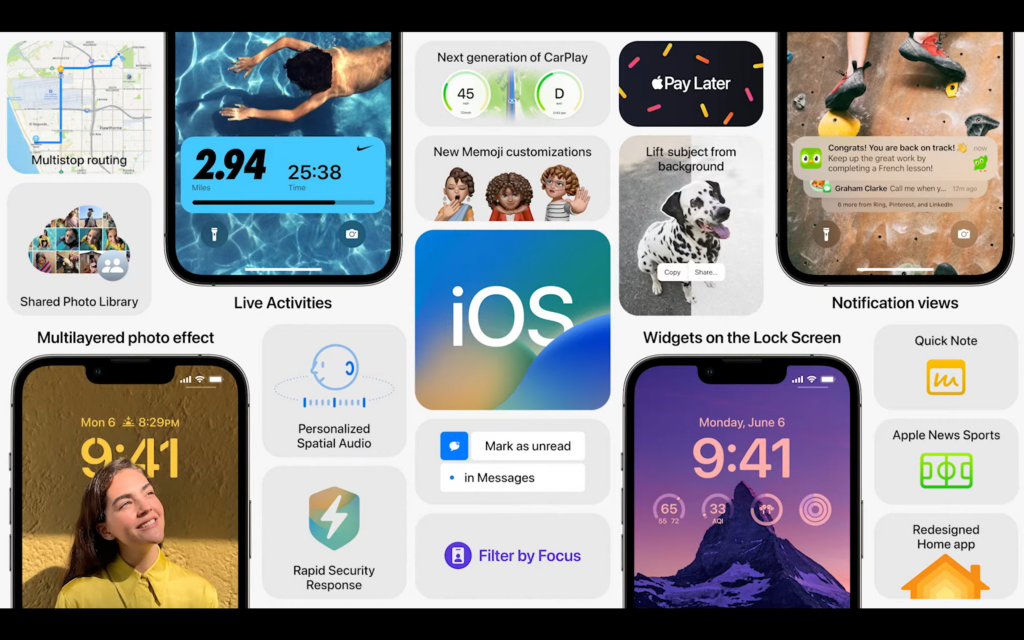 With iOS 16 having just been released, you might be wondering what’s new compared to the previous operating system. Here are the biggest changes.

If you’re an iPhone user and you tuned in to WWDC 2022, then the chances are that you’re eager to get your hands on the latest iOS 16 software as soon as it drops, to get your smartphone bang up to date. But what are the real differences that you’re going to notice compared to iOS 15? Here are the main changes.

Before you get too excited about all the new features coming your way, first remember to check whether your phone is compatible with this new operating system. While Apple tends to offer impressive long-term support, there always comes a time to say goodbye to older devices, and this year quite a few were dropped from the list. Here’s the rollcall of phones that will sadly not be updated to iOS 16:

All the phones released after those models, from the iPhone 8 onwards, will be eligible for the update.

All devices that can be updated to iOS 16 will be treated to the following new key features, which are bound to excite iPhone owners. Here’s the rundown.

This chance is a particularly big one that you’re going to notice every time you get your phone out of your pocket. This completely new look, inspired by the Apple Watch, sees an easy range of personalisation options arrive on the scene, letting you change the the styles, colour schemes and font with a couple of taps.

There’s also a wide selection of widgets that you can add, while portrait photos can be brought forward from the backdrop, resting slightly in front of the clock, for an effective “popping” effect.

What’s more, the notifications that you’ll receive on that lockscreen have also seen a major rethink. Live Activities is a feature than pins notifications and updates them, for activities such as live sports or the progress of an Uber ride. You can also choose how groups of notifications are displayed. Stacked view keeps them at the bottom of the screen, only displaying the top card. Count view hides the notifications away, only telling you how many you’ve got. Finally, list view takes up the full screen with individual notifications.

In iOS 16 Apple has introduced an update that will let you edit or unsend messages that you have sent within the last 15 minutes via iMessage, potentially saving an awful lot of embarrassment. Any messages that you’ve changed will be marked as “edited” in the app. You’ll also be able to mark messages that you’ve read as being unread in order to manage your replies.

In previous editions of iOS, you needed to have an Apple Watch to make use of Apple’s Fitness app. However, that will change with iOS 16. In iOS 16 you’ll now be able to download and use the app with just your iPhone as the input device, as it can track steps and estimate calories burned without the need of a wearable.

You’ll now get order tracking in Apple Pay, so that you can easily follow the progress of any parcels that you’ve paid for in-app. On top of that, the new Apple Pay Later service will let you makes purchases in four equal installments over six weeks with zero interest and without fees.

After reading up on the details of the new software, it’s not surprising that many iPhone users are keen to get to the goodness as soon as possible. You can get the OS update on day one by enrolling as an Apple Developer and paying the considerable sum of £78.99. The public beta will be available a little later in the year, and we expect the full software update to arrive around the time that the iPhone 14 launches in September or October.

Sonos Ray vs Sonos Arc: Which suits you best?

Apple M2 vs Apple M1 Max: Which wins out?

MacBook Air M2 vs 14-inch MacBook Pro: How do they compare?

The post iOS 16 vs iOS 15: What's the difference? appeared first on Trusted Reviews.

OnePlus 10 may be in the works after all