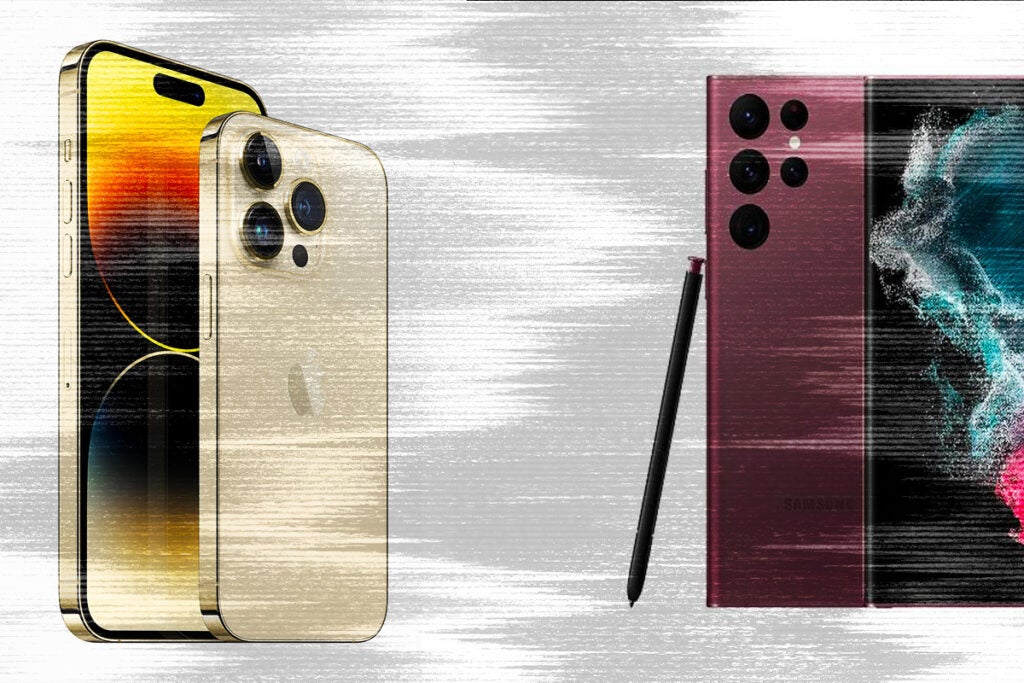 Apple recently unveiled the newest additions to its flagship smartphone line-up with the iPhone 14, iPhone 14 Plus, iPhone 14 Pro and iPhone 14 Pro Max. But, how does the premium model compare to Samsung’s own high-end Galaxy S22 Ultra?

We’ve put together this guide to break down how exactly the iPhone 14 Pro stacks up to the Samsung Galaxy S22 Ultra aside from their differing operating systems. Read on to discover all the standout differences between the two premium smartphones.

One of the most interesting new features to come to the iPhone 14 Pro is the Dynamic Island. Not only has Apple finally ditched the notch on the Pro, but it’s managed to integrate the remaining group of sensors into the OS by displaying notifications from certain apps and incoming calls.

The S22 Ultra, meanwhile, has a smaller but less seamless punch-hole camera in top centre of its screen.

The Ultra has a larger display at 6.8-inches compared to the Pro’s 6.1-inch screen (for a larger iPhone, you’ll have to look toward the 14 Plus or 14 Pro Max). Otherwise, both phones feature always-on displays and 120Hz refresh rates.

The S22 Ultra has an additional camera sensor

We were especially impressed by the zoom capabilities of the Ultra in our review and found that the main sensor captured rich and vibrant images, though at times the details looked a little too sharp.

You’ll have to wait for our review of the iPhone 14 Pro to hear how the two cameras compare with real-world use.

The iPhone 14 Pro has some unique safety features

Apple has announced two new safety features on the iPhone 14 and Apple Watch 8 lines that you won’t find on the S22 Ultra – Emergency SOS via satellite and Car Crash Detection.

Emergency SOS now supports satellite frequencies, allowing users to send a message to emergency services and share their location on Find My when outside of cellular and Wi-Fi range in the US and Canada. However, this feature is only free for the first two years.

Car Crash Detection, meanwhile, will automatically detect if you’ve been in a car crash and contact emergency services and emergency contacts with your location if you don’t dismiss the feature after a 10-second countdown. This feature requires two new motion sensors, so it’s unlikely Samsung would be able to introduce the same feature to the S22 Ultra with a simple software update.

The Galaxy S22 Ultra comes with an S Pen

If you’re one for sketching or note-taking when you’re out and about, the S22 Ultra might appeal more than the iPhone thanks to the inclusion of the S Pen.

The S22 Ultra has essentially taken the place of the Galaxy Note in Samsung’s line-up and you no longer need to pay extra to get the stylus with the phone. It now comes built-in with its own slot so you can always have the pen handy.

One surprising change Apple introduced with the iPhone 14 was the removal of the SIM tray.

From this year, users will need to pair their iPhones with an eSIM rather than a physical SIM card. This change has only been made in the US and only applies to the iPhone 14 series, so users in the UK don’t need to worry about switching to an eSIM at this point.

Galaxy phones still have their SIM trays at this point, but we wouldn’t be surprised to see other manufacturers, like Samsung, follow suit in the future as eSIM seems to be the way forward.

iPhone 14 Pro vs Pixel 6 Pro: Which Pro is right for you?