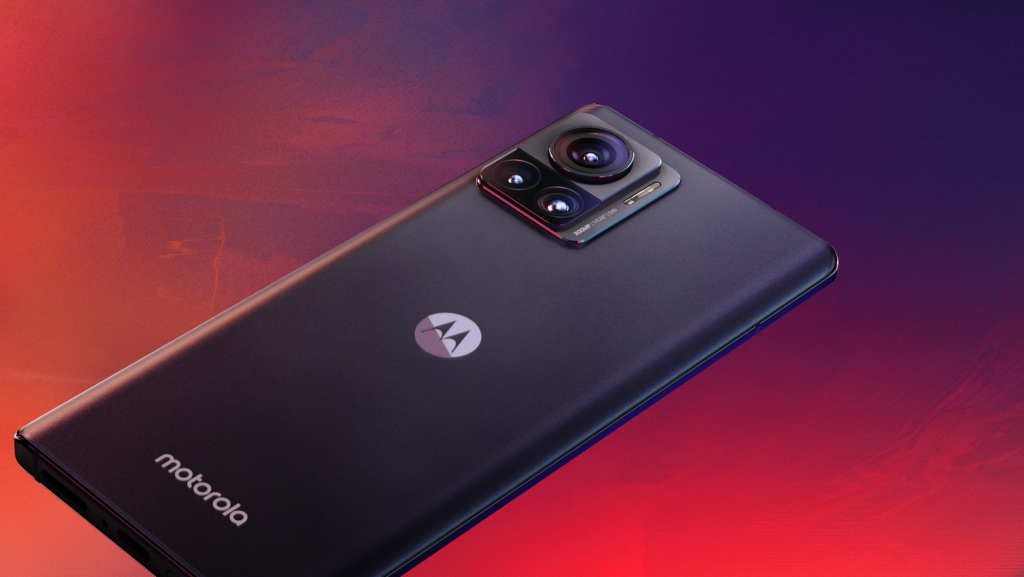 The Edge 30 Ultra is the big news though, thanks to an industry-first 200-megapixel camera offering that has been achieved by combining 16 megapixels into one 2.56um Ultra Pixel, Moto says. It can also shoot 8K video, or 4K with HDR10 support.

It’s joined by a 50-megapixel ultra-wide camera lens and a Macro Vision offering that’ll get you in 4x closer to the subject, while the array is rounded out by a 2x telephoto lens. Moto says this helps to enable variable focal length for portrait shots too, with wide, standard or close-up settings. Even the selfie camera is much larger than we see on most phones, with a 60-megapixel offering.

Beyond the cameras, the new flagship is powered by the Snapdragon 8+ Gen 1 SoC, 12GB of DDR5 RAM and 256GB of storage. The 6.67-inch pOLED display, which curves at the right edge, provides a Full HD resolution with 144Hz refresh rate and HDR10+ support. It’s also got Dolby Atmos support too to make viewing video and playing games all the more immersive.

As well as 5G compatibility, there’s Wi-Fi 6E support and 125W wired charging of the 4610mAh battery. You can also power the phone at 50W wirelessly, while donating a bit of battery to your friends via 10W wireless power sharing. Moto says the top speeds will get you enough juice to get through the day in just 7-minutes. Fantastic if you realise you haven’t charged your phone before heading out to work in the morning.

Sitting beneath the Ultra is the Motorola Edge 30 Fusion. It’s not quite as snazzy, but still has plenty worth shouting about. There’s the Snapdragon 888+ 5G chip sitting beneath a 6.55-inch “borderless” display that also has a full HD resolution with HDR10+ and a 144Hz refresh rate. You’ll also get Dolby Atmos support from the stereo speakers and enough power to get through the day from ten minutes on charge, thanks to the 68W wired charging.

In terms of cameras there’s a 50-megapixel OIS main sensor that can shoot 8K video and that’s joined by a 13-megapixel ultra wide camera, with built-in macro. There’s also a 32-megapixel selfie camera on the front of the device.

The Motorola Edge 30 Fusion is a lot cheaper than the flagship model, at £499.99/599.99 euros and is be available now in Cosmic Grey, Aurora White, Solar Gold, Neptune Blue with a Vegan Leather option too.

Our own Peter Phelps has already gone hands-on with the Motorola Edge 30 Fusion and you can read his first impressions there.

Finally, there’s the Edge 30 Neo, which Moto says is built for big dreams. How so? Well, we’re not exactly sure judging by the press release. The headline appears to be the partnership with Pantone for the Very Peri, Aqua Foam, Black Onyx or Ice Palace colour schemes.

It’s a slimmer and lighter phone and has its own LED band around the camera housing, which lights up in different way depending on the notification you’re receiving. The 6.28-inch 120Hz OLED display promises 100% of the DCI-P3 collar gamut, while the speakers also get some Dolby Atmos love.

The chip is the mid-range Snapdragon 695 5G and there’s also 68W charging on board. There main rear cameras is an OIS-equipped 64-megapixel sensor, accompanied by a 32-megapixel front-facing camera.

iPhone 14 Pro vs OnePlus 10 Pro: What are the main differences?