Nothing phone (1) vs Samsung Galaxy S22 Ultra: A new king? 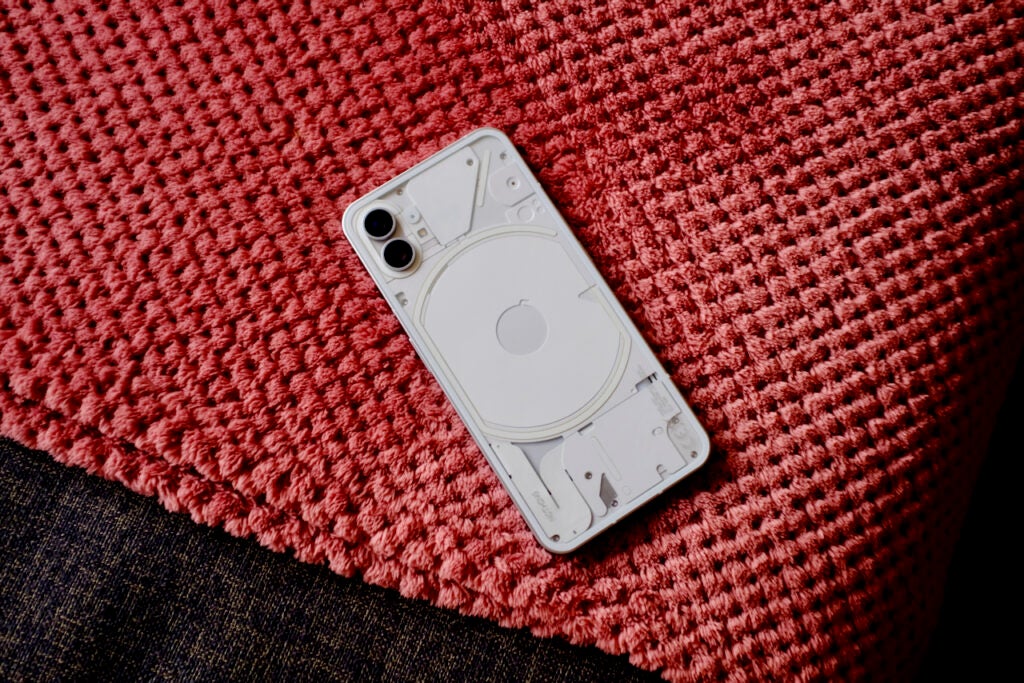 The Nothing phone (1) is the new face in town, but how does it compare to the top Android smartphone on the market? Read on to find out.

The Samsung Galaxy S22 Ultra was named as our choice for the best Android flagship phone, astonishing us with its brilliant screen, powerful performance, and versatile camera. However, could this be set to change with the release of the Nothing phone (1)? This new device certainly takes the eye with its light-up rear panel, but we’ll take a look at the specs too for an early idea of how the two might compare.

We’ve not yet had enough time to fully review the Nothing Phone (1), so please bear in mind that this is a very early appraisal based on the specifications rather then being a deep-dive, and we’ll update this page when our full review is published.

The Nothing Phone (1) certainly looks a little different from the rest of the handsets on the market, and that is precisely one of its key selling points. The general layout might remind you quite a bit of the iPhone 13, with its flat screen, curved corners, and dual camera sensors; however, you won’t see the array of LED lights on the back of products from Apple or any other major phone manufacturer, come to that. This isn’t just decoration by the way, as unique lighting patterns indicate who’s calling, and there’s a bar that shows charging status while it’s juicing up.

On the other hand, we weren’t actually too impressed by the design of the Galaxy S22 Ultra. For one thing there’s the sheer scale of the thing, which is big, bulky, and wide, so you’ll struggle to hold it easily with one hand. The decision not to include a dedicated camera module, instead leaving the sensors bare and exposed, is also a puzzling one that did not endear us to the device.

However, the S22 Ultra also has a USP of its own in the form of its handy S-Pen, which is stored in an onboard silo in the handset. This is useful for notes and sketching, and certainly stands out from the crowd.

As far as the looks are concerned, it seems that our preference would be for the Phone (1).

The Nothing phone (1) has an OLED display that measures 6.55-inches, and it’s packed with premium features. Its support of HDR10+ and 10-bit colour depth should make it punchy and immersive, while the 60-120Hz adaptative refresh rate should make it pleasingly smooth to the eye. The resolution is 1080p, and the panel is made of Corning Gorilla Glass so should be robust.

The S22 Ultra’s display is larger, at 6.8-inches, and it is similarly packed with great specifications, including HDR10+ and an adaptive 120Hz refresh rate, but there are some elements where it outstrips the Nothing Phone (1). For one thing it has a much higher resolution, at 1440 x 3088 pixels, and it has Corning Gorilla Glass Victus +, the latest generation of the protective screen that should be highly resistant to scratches and damage.

We piled the praise on this screen, with our reviewer Max Parker saying, “To my eyes, the screen looks like one of, if not the, best around. Colours pop without feeling lurid and detail is simply unmatched.”

The Nothing Phone (1) has two camera sensors on the rear, wide and ultrawide, and each one has a 50-megapixel resolution. We’ve not yet have the chance to try them out, but they should offer some level of versatility even though there’s no telephoto lens for optical zooming.

Speaking of versatility though, the S22 Ultra offers a great deal of this thanks to its array of four sensors. Boasting a 108-megapixel wide camera, a 12-megapixel ultrawide lens, and two 10-megapixel telephoto sensors (one with 3x optical zoom, one with 10x optical zoom), it’s prepared for pretty much anything.

We were very impressed with the quality of images resulting from the S22 Ultra, describing them as follows: “Colours are rich and vibrant and detail is pin-sharp.” Where the S22 Ultra particularly excels is in its zoom capabilities, which lead the market. Even at 10x zoom, shown below, images remain clear and usable.

The Nothing Phone (1) is going to face an uphill battle competing with the S22 Ultra on its photographic merits, but we look forward to seeing how it fares.

The Nothing Phone (1) is powered by the Snapdragon 778G+ chipset, which is in the upper-mid range of Qualcomm’s range and boasts 5G connectivity. We’ve not yet had the chance to put it through its paces, but we’d expect it to deliver respectable performance levels though a step below what the best flagship processors around can achieve.

There are two variants of the S22 Ultra when it comes to the chipset, with some using the Exynos 2200 and other using the Snapdragon 8 Gen 1. In our tests we found superior performance levels were delivered by the latter of these, but both were capable of delivering very high benchmark scores and excellent gaming performance.

The Nothing Phone (1) has a 4500mAh battery capacity, which is decent if not quite up to the 5000mAh cells that we’ve seen present on many mid-range rivals. As we haven’t yet had the chance to see how well this holds up over the day, we can’t give a full assessment yet. However, it’s worth noting that there’s also 33W wired fast-charging here, said to top up the battery by 50% in half an hour, and it’s capable of wireless charging too.

With the S22 Ultra, we found the battery life to be “good but not groundbreaking”. It lasted us through the day before hitting the red, but you’re not going to get multi-day endurance out of it if you’re using it intensively. The wired charging capability let us get to 100% in around one hour, and there’s slow 15W wireless charging on board too for added convenience.

This is one of the key differentials between the two handsets in question. While the Nothing Phone (1) is set to retail for an affordable £399, the Samsung Galaxy S22 Ultra has a flagship price to match its flagship performance: it costs a whopping £1149, which is almost three times as much as its rival. If you’re looking for value for money, you may well find it in the Nothing Phone (1), but the S22 Ultra is only reserved for those with significant means as their disposal.

It’s too early for us to be able to decide one way or the other between these two handsets. However, at this stage we can say that we appreciate the Nothing Phone (1)’s design, and that its screen specifications seem strong for the price. However, in other specs, particularly performance-related, the Galaxy S22 Ultra is likely to have the upper hand. That’s hardly surprising, given the price difference, but we’ll have to undertake rigourous tests over the coming days to prove whether that really is the case.

Nothing Phone (1) vs iPhone 13: Spec comparison