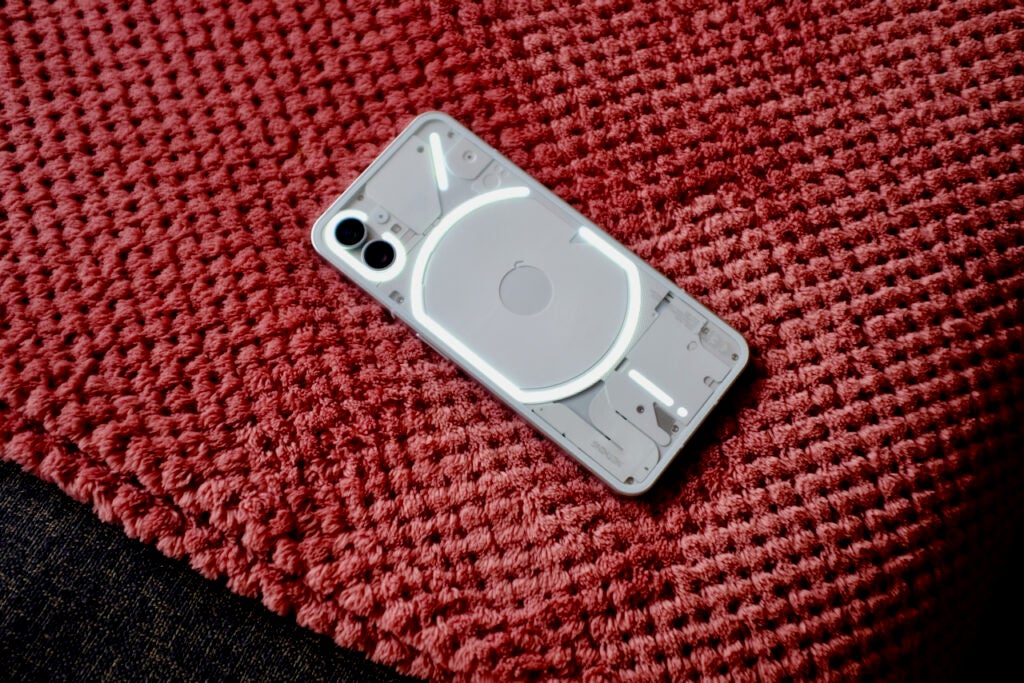 Have you heard all the hype? Now consider our early impressions of the Nothing Phone (1) to see what we made of its design, features and more.

33W fast-chargingNothing claims you can get 50% power in 30 minutes when charging wirelessly, and you can also use wireless or reverse wireless charging to top up the device

The Nothing Phone (1) is the first Android phone, and the second product following the Nothing Ear (1) from the hyped startup co-founded by Carl Pei.

Carl Pei is familiar with Android smartphones, as he was one of the co-founders of OnePlus – a brand that shares many similarities with Nothing.

Like OnePlus, Nothing has focused a lot on building hype ahead of its Phone (1) launch. It’s a brand that has whipped up a frenzy of support on Twitter, and has already sold an unreleased phone on a website more commonly known for its sneakers. If you followed OnePlus’ trajectory, before it became an obvious Oppo offshoot, the story of Nothing will be achingly familiar.

However, making a new phone is a tough proposition – and hype alone won’t be enough to see it succeed. An intensively competitive market, even big beasts such as LG have been squeezed out from a sector now dominated by the likes of Apple, Samsung and Xiaomi. As such, Nothing could have a tricky road ahead if it wants to become the next big-name brand.

I’ve only spent a short amount of time with the Nothing Phone (1) at this point, so the following article is far from a full in-depth review. Instead, these are very much my initial impressions of a very interesting phone that’s desperately trying to stand out.

120Hz display is welcome at the priceGlyph lighting system is a neat, if limited, additionOverall look reminiscent of the iPhone 13

It’s hard for a smartphone to stand out from the pack these days. A decade ago, we had variety in terms of design; but now, just about every handset – aside from pricey foldables that are out of reach for most buyers – is a rounded-off rectangle.

Nothing isn’t rewriting the rulebook when it comes to the Phone (1)’s blueprint, but it is trying to differentiate itself through adopting a striking design.

Like the Game Boy consoles of my childhood, the Nothing Phone (1) features a clear back through which you can catch a glimpse of the snaking cables and internal components of the device. I love this style and it’s executed well here, whether you opt for the device in white (pictured below) or black. Clearly, much work has gone into making the insides of this phone look neat and appealing.

The transparent back also allows the phone’s main “feature” – the Glyph Interface – to function. Packed inside the phone are a series of bright, white LED light strips that act as, to put it as simply as possible, a souped-up notification system. The arrangement of LEDs flash when you receive a notification, while a strip towards the bottom fills up as the phone charges. It’s clever, and something I hope will prove more than a gimmick having used the device for longer than a few hours.

Glyph aside, the Nothing Phone (1) looks, and feels, very much like an iPhone 13. The sides are flat, as is the front and back of the device, while a duo of camera sits on the back. The aluminium frame is light and should offer good levels of durability, further enhanced by the use of Gorilla Glass coverings. In fact, the Nothing Phone (1) looks so much like an unorthodox iPhone 13 that my partner mistook it for Apple’s next device when she picked it up for the first time.

This is, of course, far from a knock against the Nothing Phone (1). It’s a good-looking device, and while it would have been nice to see an IP68 rating for added water-resistance above its actual IP53 certification, it’s a feature we rarely see at this £399 price anyway.

As for environmental credentials, Nothing says the Phone (1) is made from 100% recycled aluminium, with 50% of the plastic components coming from “bio-based and recycled sources”.

We’re also far from guaranteed a top-end display at this price, but Nothing has at least decided against skimping on the screen. There’s a 1080p HDR10+ capable OLED here, with a smooth 120Hz refresh rate. Considering Google’s upcoming Pixel 6a has a mere 60Hz display, Nothing should have the one-up on its £399 rival in that department.

Lower focus on specs compared to much of the competitionDual rear camera, mid-range Snapdragon chip and 4500mAh batteryNo IP68 rating, but wireless charging is welcome

Unlike OnePlus, Nothing isn’t touting the Phone (1) as a flagship in terms of its performance. In fact, the specs list here is very modest. If a top-tier Qualcomm chipset or ridiculously snappy charging is a must-have feature, you might be better off looking at a device from Realme or Xiaomi instead.

That said, what is on offer with the Nothing Phone (1) should be more than enough for most users. RAM comes in at either 8GB or 12GB, while the mid-range Snapdragon 778G+ chip has been tweaked especially for Nothing, adding both wireless and reverse-wireless charging. There’s 5G – a feature you’ll find on an increasing number of phones even at this price – and a 4500mAh battery with maximum wired charging speeds of 33W. There’s no charger in the very slim box, so you’ll need to provide your own.

I haven’t spent enough time with the Phone (1) to judge performance, be it real-world or synthetic benchmarks, but I’ve always been impressed by the performance of these more modest Qualcomm chips. Yes, it won’t score as highly in benchmarks as a Snapdragon 888 or 8 Gen 1; but if using a cheaper chip allows for interesting features and design traits then I’m all for it.

I haven’t had enough time to test the camera out, either, so for now the specs will have to do. There’s a duo of 50-megapixel sensors on the rear, with the main camera being a Sony IMX766 sensor with OIS (optical image stabilisation). Around the front you’ll find a 16-megapixel sensor.

The camera specs sound adequate on paper, since this is the same sensor you’ll find on excellent smartphones such as the Oppo Find X5 Pro and Xiaomi 12. However, the quality of its real-world performance will all come down to how Nothing has built the post-processing process.

The Nothing Phone (1) runs Android 12, with Nothing promising three years of software updates. Nothing OS sits atop Android and from first impressions, it feels like a very minimal coating. There are some new widgets, including an NFT Gallery that I’d happily delete, plus a bunch of notification sounds that play nicely with the Glyph interface.

Brushing away the hype, the Nothing Phone (1) makes a strong first impression. The Glyph interface is charming, while the nostalgic design helping the device stand out among the best phones on the market.

Having only used the phone for a short period, though, questions remain over whether this is an excellent buy at £399. How good is the camera software? What’s the performance like? And is the Glyph system more than a gimmick. We hope to answer these and more with further use.

What is the IP rating? The Nothing Phone (1) has an IP53 rating, which means that the device is protected against dust and spraying water (no pressure) when tilted up to a 60-degree angle. What colours is it available in? It’s offered in either black or white.

You can see a detailed breakdown of the phone’s specs and how they compare to competing handsets in the table below.

A ‘hands on review’ is our first impression of a product only – it is not a full test and verdict. Our writer must have spent some time with the product to describe an early sense of what it’s like to use. We call these ‘hands on reviews’ to make them visible in search. However these are always unscored and don’t give recommendations. Read more about our reviews policy.

IP rating
An abbreviation for ‘Ingress Protection Code’, which lets you know to what extent a device might be waterproof or dustproof.

Variable Refresh Rates
Variable Refresh Rate enable a game console/PC to send video frames as quick as possible to a display, with the screen adapting its own refresh rate in real-time to match the source, reducing visual artefacts and offering a more responsive performance

Refresh Rate
The number of times the screen refreshes itself per second.

Nothing phone (1) vs Samsung Galaxy S22 Ultra: A new king?

How to buy the Nothing Phone (1)