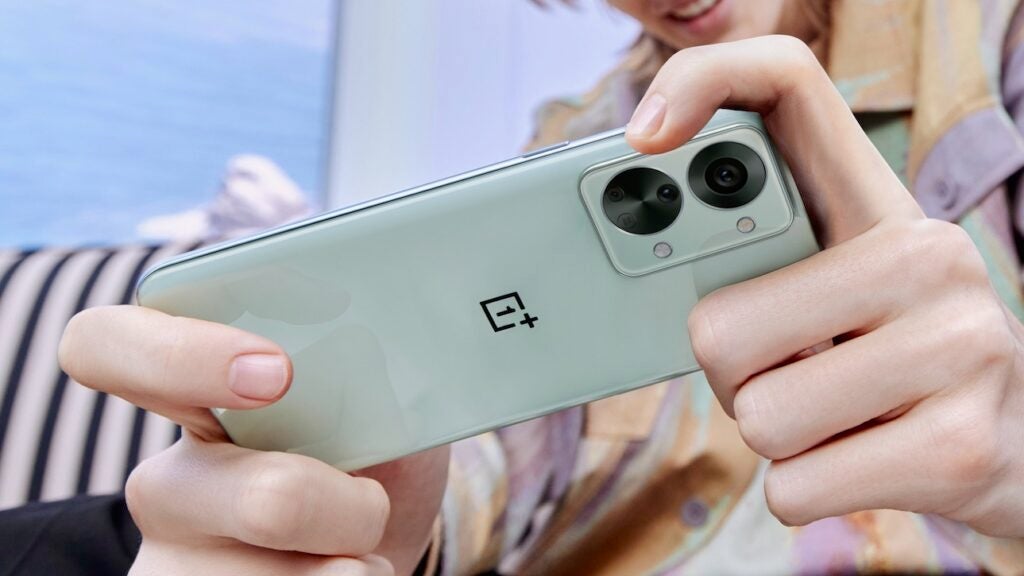 OnePlus has announced a new mid-range smartphone in the OnePlus Nord 2T, alongside the affordable Nord CE 2 Lite and Nord Buds.

The OnePlus Nord 2T is a direct follow-up to last year’s OnePlus Nord 2, and it looks to be extremely similar, with the same display, camera system, and battery wrapped up in a moderately refreshed design. There are a few interesting tweaks and additions here, however.

OnePlus has given the design of its mid-ranger a light overhaul, with new colours (Gray Shadow and Jade Fog) and expanded camera surrounds.

While that 6.43-inch 2400 x 1080 90Hz AMOLED display is the same as before, OnePlus has incorporated dual ambient sensors for a smarter auto-brightness function. That’s something a lot of phones get wrong, surprisingly.

Meanwhile the camera system again includes a near-flagship-grade 50MP Sony IMX766 wide sensor with OIS, which impressed us a lot in the Nord 2 (and the Realme 9 Pro Plus). You also get an 8MP ultra-wide and a 2MP mono lens, as before.

The improvements here include an improved 32MP selfie camera – carried over from the OnePlus 10 Pro, no less – and improvements to the AI assistant brought about by the switch to a new processor.

Talking of which, OnePlus has bumped the Nord 2T up from the Dimensity 1200 to the Dimensity 1300. This will be the chip’s debut, so we’re not yet sure of the kind of performance boost this will provide. OnePlus is promising “great gaming performance, more efficient power consumption, and better temperature control”.

Last year’s Nord 2 performed great for the money, so we’re not worried about this one. You also get either 8 or 12GB of LPDDR4X RAM.

Another headline addition is the same 80W charging system that came with the flagship OnePlus 10 Pro. The Nord already charged pretty promptly at 65W, but OnePlus is promising a 20% bump.

The OnePlus Nord Buds represent the first time OnePlus has attached its value Nord branding to a set of headphones. These true wireless earphones feature 12.4mm titanium dynamic drivers, Dolby Atmos support, and a claimed 30 hours of playback on a single charge – all for a mere £49/€49.

All three Nord products go on sale May 24, with pre-orders starting on May 19 at OnePlus.com.