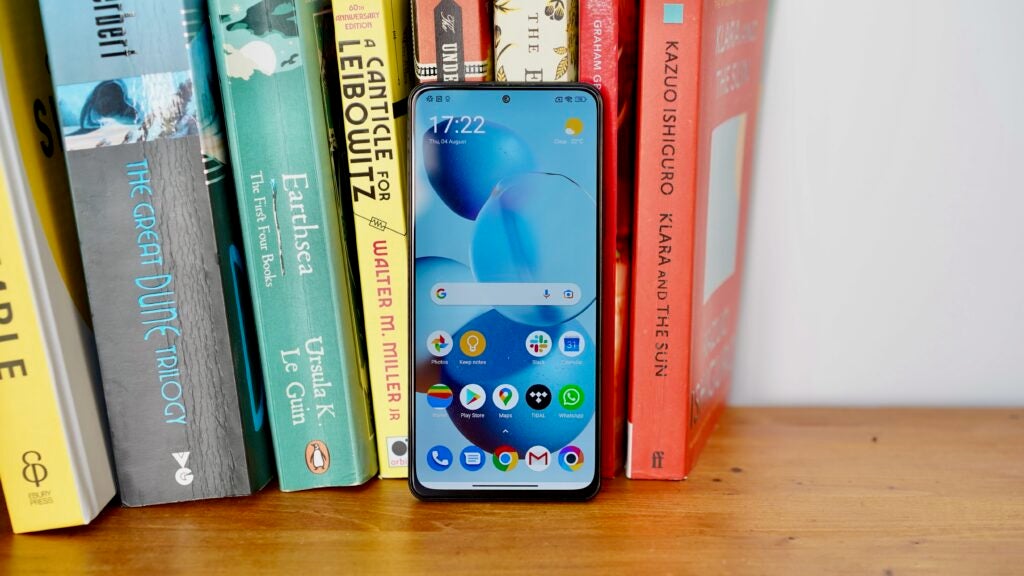 The Poco F4 is a fine mid-range phone, delivering strong performance and an excellent display. However, you could say the same for the Poco F3 that came before it, with very little change beyond the price. It’s still one of the best smartphone experiences you can have for less than £400; but the competition is only getting stronger, and the Poco brand no longer offers the stand-out pick.

Last year, the Poco F3 wowed with its combination of compelling components for a double-take-inducing price point. Pound for pound, it was one of the most impressive phones of 2021.

That leaves the Poco F4 with a tricky conundrum. How do you follow up on a phone that did almost everything right?

The answer, it seems, is to do pretty much the same thing all over again, with only minimal tweaks to the formula. It’s perhaps a smart choice, resulting as it does in a very well-rounded phone.

But it does leave us slightly less enthused about the Poco F4. Especially given that the mid-range competition is so strong in 2022, not to mention the fact that the F4 comes with a 15% price bump. At £379 for the entry 6GB of RAM / 128GB of storage model reviewed here, the Poco F4 is £50 dearer than the equivalent Poco F3.

Perhaps the biggest thing that Xiaomi has changed up for the Poco F4 is its design. That’s not a bad thing in itself, given how nondescript the Poco F3 looked.

Not that the Poco F4 looks radically new. It’s just a different shade of generic, with dual flat-glass surfaces, a flat-ish plastic rim, and a stepped camera module that may remind you of the Redmi Note 11 line to which the Poco is a not-so-distant cousin. There’s also something of last year’s Xiaomi Mi 11 Lite to the design, minus the attractively curvaceous camera module.

The Night Black shade in which I have as a review model doesn’t do the phone a lot of favours. It’s a lot more drab than the Nebula Green and Moonlight Silver options, and it ensures that every grubby fingerprint shows up clearly.

Familiarity aside, the Poco F4 is pleasingly slim at 7.7mm thick. It’s still a large device, though, and it isn’t especially light at 195g.

An IP53 rating ensures that it’s moderately dust- and splash-resistant, similar to its predecessor. If you want more assurances in this department for the money, check out the Pixel 6a with its IP67 rating.

Xiaomi has changed up the design of the Poco F4, but it’s left the display alone. Considering this 6.67-inch AMOLED screen was one of the standout components of the Poco F3, it’s tough to paint that as a negative.

You still get an FHD+ resolution, as well as flagship-echoing specs of a 120Hz refresh rate and HDR10+ support. It still gets nice and bright, too, to the tune of 900 nits in high brightness mode and 1300 nits at its peak. Gamers will appreciate the 360Hz touch sampling rate, which ensures that it’s responsive to inputs.

While it’s extremely familiar, you don’t get any better than the Poco F4’s display for the money. Still.

If you’ve picked up a faint whiff of stagnation with the Poco F4, you’re not mistaken. But while the camera system isn’t a huge step forward, it does represent some measure of progress.

The image sensor is the same size – a rather compact 1/2in – but it’s now 64 megapixels rather than the 48 megapixels of the Poco F3. Far more importantly, the Poco F4 has now gained OIS. This makes shots far more stable, and is of particular value when the light starts to drop.

Indeed, Night mode shots here are improved, with greater detail and clarity. They’re still not on a par with shots snapped on the likes of the Pixel 6a, the OnePlus Nord 2T, or the Realme 9 Pro Plus, however.

Nor, for that matter, are the shots captured during daylight hours. While the F4 is capable of capturing decent shots in good lighting, they lack the next-level depth and richness of those aforementioned rivals.

Xiaomi’s processing does some heavy-lifting here, and its colour science is pretty punchy. Those vibrant colours are calling out to be shared, but they’re not exactly what you’d call authentic or natural.

The 8-megapixel ultrawide camera seems to be business as usual – which translates as not particularly great. Detail drops off significantly compared to the main sensor, particularly at the edges; dynamic range is limited, and I noticed blue sky artifacts when shooting on a clear day.

The 2-megapixel macro camera has actually been downgraded from the 5-megapixel Poco F3, rendering it even more pointless than before. That’s some feat.

All in all, while Xiaomi has improved the Poco F4’s camera slightly overall, it still falls well short of the best in class.

We’re back in familiar territory when discussing the Poco F4’s performance. It’s identical to that of its predecessor, courtesy of the very same Snapdragon 870 chip and the same 6GB (or 8GB) of RAM.

You could view this as a disappointment, given that Qualcomm’s chip was launched way back at the beginning of 2021. It’s also worth pointing out that the 870 is based on the Snapdragon 865, which launched even further back in 2020, albeit with superior clock speeds.

The simple fact is that Qualcomm still hasn’t replaced the Snapdragon 870 at the time of writing. This was an unusually capable mid-range chip for its time, and it’s still a very strong performer today in the Poco F4.

An average Geekbench 5 multi-core score of 3178 handily beats both the OnePlus Nord 2T with its speedy MediaTek Dimensity 1300 and the Pixel 6a with its custom (and supposedly flagship) Tensor chip. In the GPU stakes, a Wild Life score of 4327 falls a little short of the OnePlus Nord 2T, which might offer a sign that it’s time for newer silicon in the Poco F5. Still, it’s a more than solid result.

In the hand is where performance counts, of course, and the Poco F4’s performance is pretty much beyond reproach. Flitting between apps, home screens, and menus is almost flagship-fast, while you’ll be able to play games such as Genshin Impact on High settings and frame rates without a major hit to performance.

Once again, 5G is an inherent part of the package, so you’ll get speedy network performance while out and about, provided you have the appropriate network coverage.

It’s a familiar story, but the biggest potential snag to your enjoyment of using the Poco F4 will likely come from its custom MIUI software. It’s never been a personal – or, indeed, site – favourite, with its gauche icons and clumsy attempts at approximating iOS.

MIUI 13 on top of Android 12 does nothing to change that view. You’ll learn to live with it, and the best thing that can be said about it is that it’s customisable. But any mid-range phone with a stock or stock-Adjacent take on Android has the advantage in this respect.

It shouldn’t surprise you to learn that the Poco F4 uses a battery with a capacity that’s identical to the Poco F3. At 4500mAh, it’s also the same as the unit used in the OnePlus Nord 2T, and very similar to the Pixel 6a (on 4410mAh).

Stamina wasn’t one of the strong suits of the Poco F3, but we had few complaints at the time. I don’t have any with the Poco F4 either.

It’s capable of standing up to a day of use with 4hrs 45mins of screen-on time – what I’d term a moderate-to-intensive day – with just under half a tank left.

That’s pretty reassuring, especially when you consider that I switched the display to a permanent 120Hz almost straight out of the box, as I always do. If you keep the phone set to its default Auto state, you’ll buy yourself even more battery headroom.

One thing Xiaomi has improved from the Poco F3 is the charging provision. You’re given a 67W charger in the box rather than a 33W brick this time around, which will get you from 0 to 82% in 30 minutes, and to full in around 40 minutes.

One continued omission, however, is wireless charging. That was scarcely worth a mention last time around, but here in 2022 we now have a mid-range option that supports this feature in the Nothing Phone (1). It’s still far from the norm, but it’s one way Xiaomi could have improved on last year’s model.

You want rapid charging There are faster-charging phones for this money (see the Redmi Note 11 Pro Plus), but the Poco F4’s 67W charger will still get you to full in around 40 minutes.

You were expecting a leap over the Poco F3. There’s very little between the Poco F4 and its predecessor. If you can find the older phone on discount, it might be the more worthwhile buy.

The Poco F4 is another fine phone from Xiaomi’s value-oriented sub-brand, but its all-round competence is tempered by a sense of familiarity.

Its big, bright display and strong performance are noteworthy strengths, but both elements are literally unchanged from the Poco F3 before it. The same can be said for the phone’s stamina and clunky MIUI software.

The F4’s camera is slightly better than before with the key addition of OIS, but it still isn’t up to Pixel 6a or OnePlus Nord 2T’s standards. Similarly, the phone’s 67W charging is an improvement on its predecessor, but still not the fastest in the category.

All of which would be of little consequence if the Poco F4 hadn’t received a £50 price bump. It’s an easy recommendation for its all-round competence, but at the same time, you’d perhaps be better served shopping around for a cheap Poco F3 deal.

Used as our main handset during test period

Camera tested in variety of situations with all modes

Is there a charging included in the box? Yes, included here is a charger capable of 67w charging.

TrustedReviews’ holds the fact that global warming is not a myth as a core value and will continuously endeavor to help protect our planet from harm in its business practices.

As part of this mission, whenever we review a product we send the company a series of questions to help us gauge and make transparent the impact the device has on the environment.

We currently haven’t received answers to the questions on this product, but will update this page the moment we do. You can see a detailed breakdown of the questions we ask and why in our sustainability info page.

How to change the font size on iPhone