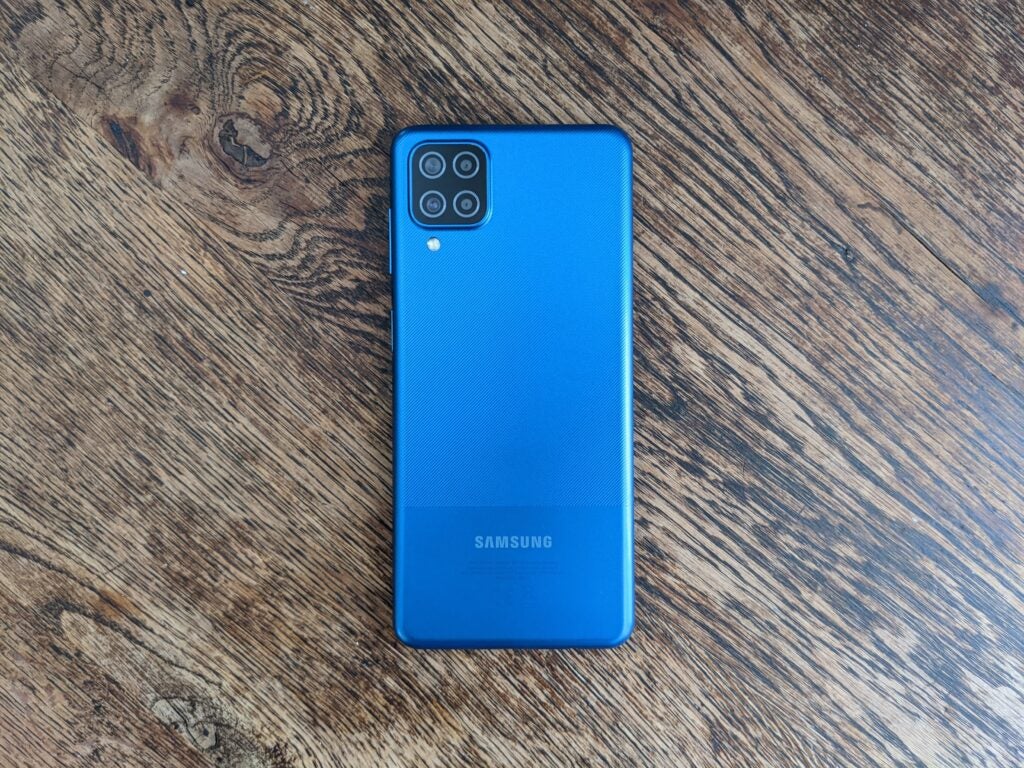 The Samsung Galaxy A12 is a cheap smartphone with lots to like about it, from its terrific battery life to its imaginative and attractive design, but its day-to-day performance is so sluggish that all of those good aspects come with a major snag.

Attractive designIt might not be made of premium materials, but this handset still looks good

The Samsung Galaxy A12 is a very cheap smartphone that almost looks too good to be true.

£169 for a handset with a de rigueur quad-camera, a hefty battery and generous screen, all wrapped up in an attractive package?

On paper, it sounds tempting enough, but how does it stack up in reality? The Motorola Moto G8 sets the bar at this price point, and unfortunately the Galaxy A12 is less than the sum of its parts.

Of course, this is a matter of personal preference, but by our reckoning the Samsung Galaxy A12 is one of the better-looking plastic phones you can buy.

The matte-finish casing runs up the handset’s sides, and a diagonal pattern of shallow ridges covers the upper section of the back. The smooth bottom-most section doesn’t detract from the appearance, creating a pleasing two-tone look.

The four rear cameras are arranged in a square module that looks less conspicuous than similar setups on some other phones, but the hardware protrudes just enough to prevent the phone from lying completely flat on a tabletop.

The inclusion of a headphone jack and microSD card slot is pleasing, and there’s also a downwards-firing mono speaker on the bottom edge.

The volume keys and the power button, which doubles up as a fingerprint scanner, are embedded within the right side of the phone, and they’re all easy to reach without having to adjust your grip.

That’s impressive, considering the Galaxy A12 rocks a hefty 6.5-inch PLS display, surrounded by a fairly thick bezel that contains the selfie camera within a teardrop-style notch.

With a 1600 x 720 resolution and a pixel density of 270ppi, the screen is plenty sharp enough for most people’s needs.

Viewing angles are also strong, with the only real stumbling block being brightness. On a sunny day, the maximum output can be found wanting.

The Galaxy A12’s four-camera configuration certainly looks the part. A 48-megapixel main lens, supported by a 5-megapixel ultrawide lens, a 2-megapixel macro lens and a 2-megapixel depth sensor gives the impression of a smartphone that takes photography seriously.

However, let’s remember that this is a sub-£200 device. Anybody hoping for results that would give the Google Pixel 6 a run for its money will be left wanting, but temper your expectations and you’ll be satisfied, at least under optimal light conditions. Take a look at the selection of shots below:

It’s not so sharp in middling or dim light, in which pictures almost without fail come out looking noisy and fuzzy. There’s no Night Mode to rescue you, and the effective HDR can only do so much.

Portrait Mode is near-ubiquitous these days, and lets you adjust the depth of field to degree of your choosing; Food Mode is like Portrait Mode for plates instead of faces; Macro Mode is for close-up shots, though the results leave a lot to be desired (see the snail above); and Pro Mode allows you to take a deep dive into the camera’s settings and tinker away to your heart’s content.

Of those four, we imagine that most users will make use of Portrait and Pro Mode.

The Galaxy A12 also offers the ability to quickly switch between the regular camera and an ultrawide camera, which can capture dramatic-looking shots from a seemingly completely different perspective, but while these can look compelling on a phone screen, they don’t look quite so hot on a larger screen or after cropping or zooming.

Around the front of the phone is an 8-megapixel selfie camera, which also supports Portrait, Pro, Macro and Food Modes. The first two we can understand, the latter not so much.

Again, it suffers in sub-optimal light, but can take decent-enough shots when the ambiance is right.

So far, so good, then. Unfortunately, it’s in the performance department that Samsung has made the greatest compromises.

The Galaxy A12 is, without a doubt, the slowest smartphone I have ever used. Any and all interactions take close to a second to register, which makes everything, from opening an app, to taking a picture, to typing a message, a frustrating experience, and intensely frustrating at times. Has it crashed? No, it’s just taking its time.

The Galaxy A12 is so slow that no matter how many times the lag brings everything to a standstill, you can’t help but tap the screen again, having convinced yourself that you probably didn’t touch the screen properly the first time. But more often than not, you did. Never have I experienced this level of lag on a phone before.

Curiously however, it is capable of running intensive games, such as Asphalt 8, without much of a hitch, and there’s no hint of lag when streaming.

The Galaxy A12 runs Android 11, but Samsung’s OneUI skin means it’s far from pure.  Amongst the preloaded, and in my case unwanted, apps are Samsung’s own browser, Galaxy Shop, Samsung Global Goals, and Facebook.

A prompt encouraging me to make use of the suite of preinstalled productivity-focused apps, such as OneDrive, Office and Outlook was laughable, considering how slowly the A12 runs.

Battery life is without a doubt the Galaxy A12’s most impressive feature; the phone can comfortably get through a day without flirting with danger, even if you throw some streaming or gaming into the mix. Use it sensibly and you might only need to charge it every two days.

In real-world use, an hour of streaming Netflix knocked 7% off its battery; half an hour of intensive gaming (Asphalt 8) ate up 6%; and half an hour of light gaming (Threes) took another 2%. That’s two hours of entertainment for just 15% of battery life. Music barely made a dent, an hour of online streaming using up 2% of the A12’s battery, while an hour of playing downloaded music knocked the Galaxy A12’s battery level down by just 1%.

However, charging the Galaxy A12 back up again isn’t quite so enjoyable. Using the charging equipment provided in the box, it took 1hr 35mins to get the phone from 0% to 50%, and a whopping 3hr 25 mins to complete a full charge.

A good-looking cheap phone with a long-lasting battery: Samsung makes nice phones, even at this end of the market, and it helps that the stamina is great.

Performance is far below average: This is a cheaper device and it’s not the fastest around.

It’s hard to criticise a £169 smartphone that looks this good and keeps going for so long between charges, but the Galaxy A12’s dismal performance poisons the well. It’s so sluggish that it’s difficult to recommend to anybody.

The good news is that it is possible to buy a solid all-rounder at the price without compromising on user experience. The Motorola Moto G8 costs £179 and does everything that the Galaxy A12 does well, but without any of the lag.

Used as our main handset during test period

Camera tested in variety of situations with all modes

TrustedReviews’ holds the fact that global warming is not a myth as a core value and will continuously endeavor to help protect our planet from harm in its business practices.

As part of this mission, whenever we review a product we send the company a series of questions to help us gauge and make transparent the impact the device has on the environment.

We currently haven’t received answers to the questions on this product, but will update this page the moment we do. You can see a detailed breakdown of the questions we ask and why in our sustainability info page.

IP rating
An abbreviation for ‘Ingress Protection Code’, which lets you know to what extent a device might be waterproof or dustproof.