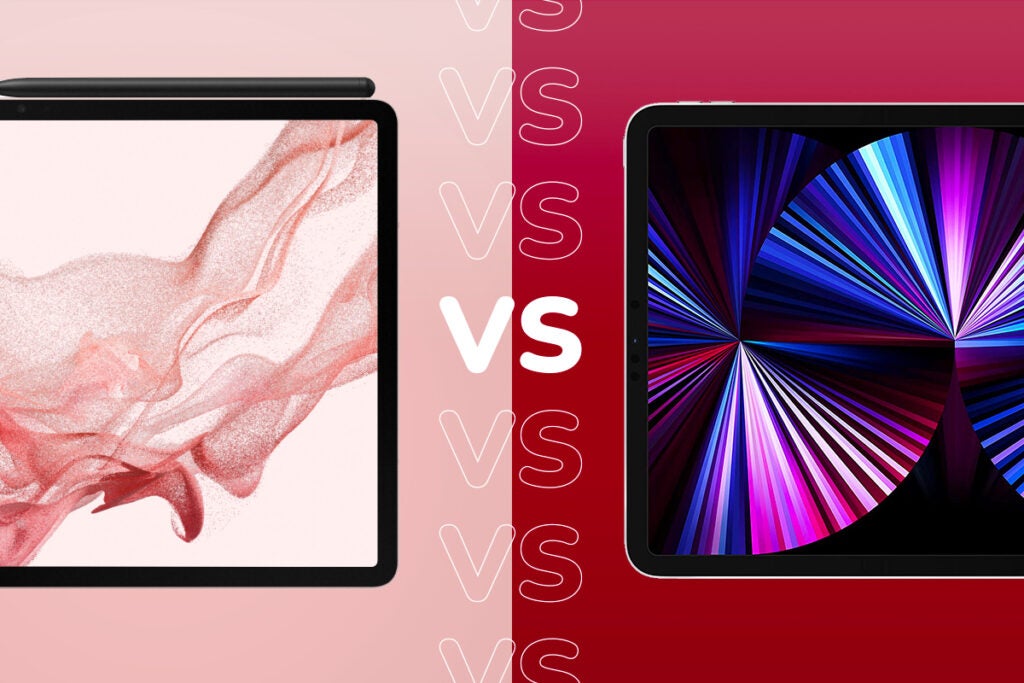 Samsung just released its latest tablet lineup, but how does the flagship Galaxy Tab S8 Ultra compare to the iPad Pro?

In this article, we’re going to be taking on the most powerful tablet in this range, the Tab S8 Ultra, and see how it stacks up against one of the best tablets out there, the latest iPad Pro (2021).

We’re going to be talking through the design, camera, specs and more, so you can decide which tablet is best for you, and which device is superior overall. We will be focusing on the 12.9-inch version of the iPad Pro, although it does come in an 11-inch variation.

Editor’s Note: This is an early access experience based on using the Tab S8 series at a press event for a few hours, compared to our full findings after reviewing the iPad Pro (2021). We will be reviewing the Galaxy Tab S8 Ultra fully in the future and will update this article accordingly with our final verdict on which is best later in the year.

Starting off with what we already know, the iPad Pro came out last year and comes in five different variations. The smallest storage options work out as the cheapest, with this model coming in 128GB, 256GB, 512GB, 1TB and 2TB.

Meanwhile, the Galaxy Tab S8 Ultra does not have a solid release date yet, but we do have an idea of the pricing. Focusing on just the Wi-Fi options and not the 5G options, as we did with the iPad, there are 128GB, 256GB and 512GB options.

The Galaxy Tab S8 Ultra features a 14.6-inch AMOLED display with a resolution of 2960 x 1848 and 240ppi. It has an adaptive refresh rate of up to 120Hz, meaning that the tablet will utilise a higher refresh rate when you’re jumping between apps or watching media, but drop lower when you’re looking at a block of text and not scrolling, so it can save battery.

Taking some inspiration from Apple, the S8 Ultra has a notched display, housing two front cameras. The slim bezel is 6.3mm, with the best screen-to-body ratio for any Galaxy Tab S device, according to Samsung.

The tablet is made of Armour Aluminium and only comes in Graphite. It also comes included with an S Pen that can be housed on the side, with Samsung claiming that the Pen has a 30% latency reduction, which makes it easier to achieve more natural handwriting.

To start with the differences, the iPad Pro does support the Apple Pencil but does not come included with the tablet. The Pro is a little smaller, with a 12.9-inch Liquid Retina XDR mini-LED display with IPS technology.

The pixel resolution sits at 2732 x 2048 with a pixel per inch rating of 264, with HDR support, alongside ProMotion technology at 120Hz. ProMotion, for those who aren’t in the know, is Apple’s version of adaptive refresh technology, so you’ll be seeing the same fluid scrolling when jumping between applications.

Apple claims that the iPad Pro can reach 600 nits during regular use, and during our testing, we got up to 525, which offered up vivid colours and perfect blacks.

In a shocking twist, this iPad Pro does not feature a notch and has a 6mm bezel. You can get the 12.9-inch variation in both Silver and Space Grey, so there is a little more choice when compared to the S8 Ultra.

We haven’t had the chance to review the S8 Ultra, so we can’t comment on the true capabilities of the camera yet, though the specs look promising.

Looking at a tablet that we’ve had the chance to test out fully, the iPad Pro houses two cameras on the back and one on the front. The front camera is an ultra-wide 12MP sensor, with a new feature called Centre Stage that follows your movement. The rear cameras sit at 12MP and 10MP and are very capable, though we found that the most used sensor is at the front, as tablets can be used for video chats and Zoom calls.

All of the Tab S8 family will run on Android 12 as well as a 4nm 64-bit Octa-Core processor. The storage and RAM options are pretty limited, with the S8 Ultra offering up 128GB and 8GB RAM, 256GB storage and 12GB RAM and finally 512GB storage and 16GB RAM.

The iPad Pro runs on Apple’s own iPad OS 15 and the infamous Apple M1 chip, which was the first processor to launch based on Apple Silicon. This chipset has been widely hailed as one of the most powerful processors, and packing a desktop-class chip inside a tablet has resulted in big performance gains, as noted in our review.

There are more storage and RAM options here, though to get 16GB of RAM you will need to jump up to the 1TB and 2TB options. The three 128GB, 256GB and 512GB options all come with 8GB RAM, giving you five variations in total.

You can check out the full specs for both the Galaxy Tab S8 Ultra and the iPad Pro just below.

Samsung is claiming that the Tab S8 Ultra will have a battery of 11,200mAh and supports Super Fast Charging 2.0 with a charger up to 45W.

Apple has packed the iPad Pro with a 40.88-watt-hour rechargeable lithium-polymer battery, with our review noting that maxing out the screen brightness and watching a movie for 14 minutes in HDR took the tablet down by 5%.

You can charge both tablets with a USB-C charger, with the iPad Pro utilising an 18W charger.

Overall, considering that we haven’t been able to review the Galaxy Tab S8 Ultra in full, we can’t make any concrete comments on what the performance of the tablet is during day to day use.

However, just looking at the specs of each tablet, it seems that Apple will stay on top as king. With an M1 processor and more storage and RAM options, it’s likely that the iPad Pro will beat out the Tab S8 Ultra in terms of raw power, but we’ll be sure to update this article when we get the Galaxy tablet in for testing.