Samsung Galaxy Z Fold 4 vs Galaxy S22 Ultra: Which flagship should you buy? 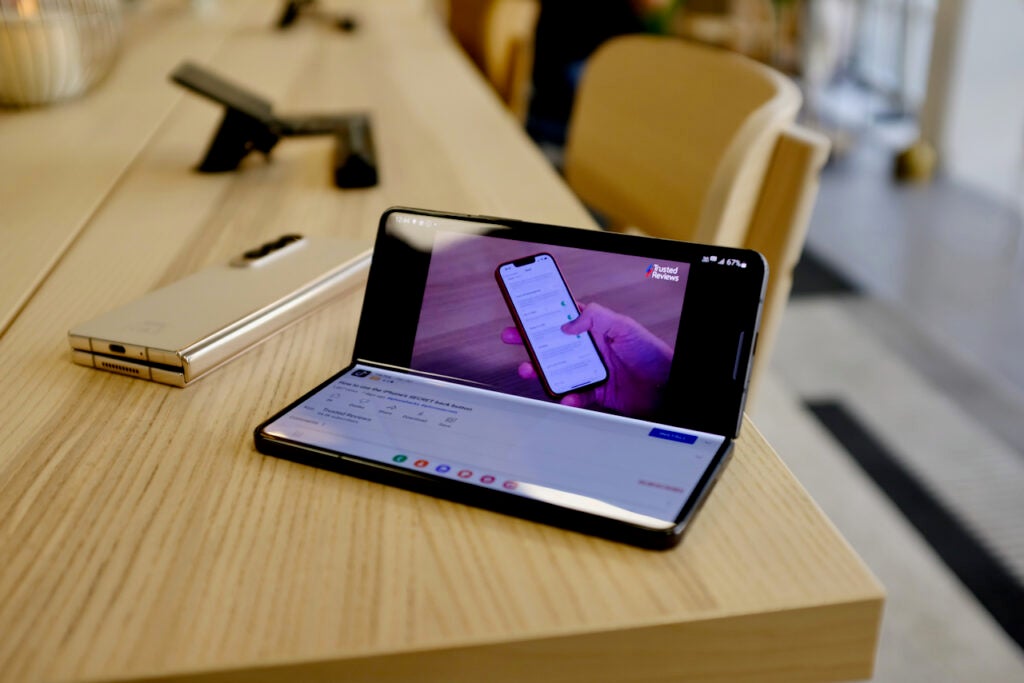 Samsung recently announced the Galaxy Z Fold 4 during its August Unpacked event, but how does the phone compare to Samsung’s flagship non-foldable, the Galaxy S22 Ultra?

We’ve already looked at how the Z Fold 4 compares to the new Z Flip 4, as well as how it stacks up to its predecessor, the Z Fold 3.

Read on to discover all the big differences between the Fold and the S22 Ultra based on the specs, as well as our experiences with each handset.

Both phones have the same IP rating for water protection (8), but only the Ultra is protected from dust with its IP68 certification. That said, IPX8 is still very impressive for a foldable phone.

Moving on to the screen, the Z Fold 4 once again sits on either side of the S22 Ultra with its large folding screen and second, smaller cover display.

The S22 Ultra has a single 6.8-inch edge Quad HD+ Dynamic AMOLED 2X Infinity-O display with a resolution of 3088 x 1440. The screen is HDR10+ certified and, like the Fold, boasts a 120Hz refresh rate. We found the display to be bright and offer fantastic detail in our review.

Both phones support the S Pen for doodles and note taking, but where the Ultra comes packaged with a pen and has its own slot, you’ll need to buy a stylus for your Z Fold 4 separately.

The S22 series is known for its cameras and the S22 Ultra sits at the top of the line with its quad rear camera.

The camera array includes features like optical image stabilisation (OIS), Space Zoom up to 100x and up to 8K video at 24fps or 4K at 60fps.

There’s also support for modes like Super Slow-mo, Hyperlapse, Portrait Video and Director’s View. We were especially impressed by the zoom and the low-light performance when we tested the camera.

The Z Fold 4 has one less camera than the Ultra with its triple array. The foldable includes a 12-megapixel ultra-wide sensor, a 50-megapixel wide angle sensor and a 10-megapixel telephoto sensor. There’s also a 10-megapixel selfie camera on the cover screen and a 4-megapixel under display camera for video calls.

The camera takes advantage of many of the same features as the S22 Ultra, including OIS, up to 8K video at 24fps or 4K at 60fps and the same Super Slow-mo, Hyperlapse, Portrait Video and Director’s View, among others.

There’s also Space Zoom (though this is limited to 30X on the Fold), as well as a Capture View feature that allows you to leverage the larger display to preview your images, access the camera controls and see thumbnails of your images at the same time.

We weren’t overly impressed with the camera on its predecessor, the Z Fold 3, considering the foldable’s price, but Samsung claims the Fold 4 packs 23% brighter pixels in its main sensor for better performance in low-light settings and the Nightography mode. However, you’ll have to wait until our full review to hear our verdict on whether it delivers.

The specs are similar too, albeit with a handful of differences.

Where the S22 Ultra was powered by the Snapdragon 8 Gen 1 (or the Exynos 2200 in the UK), the Z Fold 4 packs the newer Snapdragon 8+ Gen 1. Both phones support 5G connectivity and are available with up to 12GB of RAM and up to 1TB of storage.

Both phones run Samsung’s One UI based on Android 12, but the Z Fold 4 also takes advantage of a number of multitasking features that come with having a larger screen. These include the ability to view multiple windows at once and a new Taskbar that offers fast access to your favourite apps.

The S22 Ultra has a bigger 5000mAh battery than the Z Fold 4’s 4400mAh one, but both phones offer support for battery features like Super Fast Charging, Fast Wireless Charging 2.0 and Wireless PowerShare.

We found the S22 Ultra’s battery life to be good but nothing groundbreaking. We have yet to test this on the Fold, but the smaller battery doesn’t suggest we’ll see massive improvements in this area on the foldable.

The Z Fold 4 offers a minor, all-round update on the Z Fold 3. The specs aren’t far off what are found in the S22 Ultra and the bigger screen offers interesting advantages for multitasking and photo taking. There’s also a more up to date processor on board.

However, the S22 Ultra still offers a more advanced camera array, more impressive zoom capabilities and a bigger batter. The flagship phone also comes with an S Pen in the box, making it a great option for note takers who don’t want to pay extra for a stylus.

However, you’ll have to wait for our full review of the Z Fold 4 for our final verdict on how the foldable performs.

How to withhold your number on an iPhone