Home » Gadgets » Smartphones » Xiaomi 12 Pro vs OnePlus 10 Pro: Which phone should you get?
Smartphones

Xiaomi 12 Pro vs OnePlus 10 Pro: Which phone should you get? 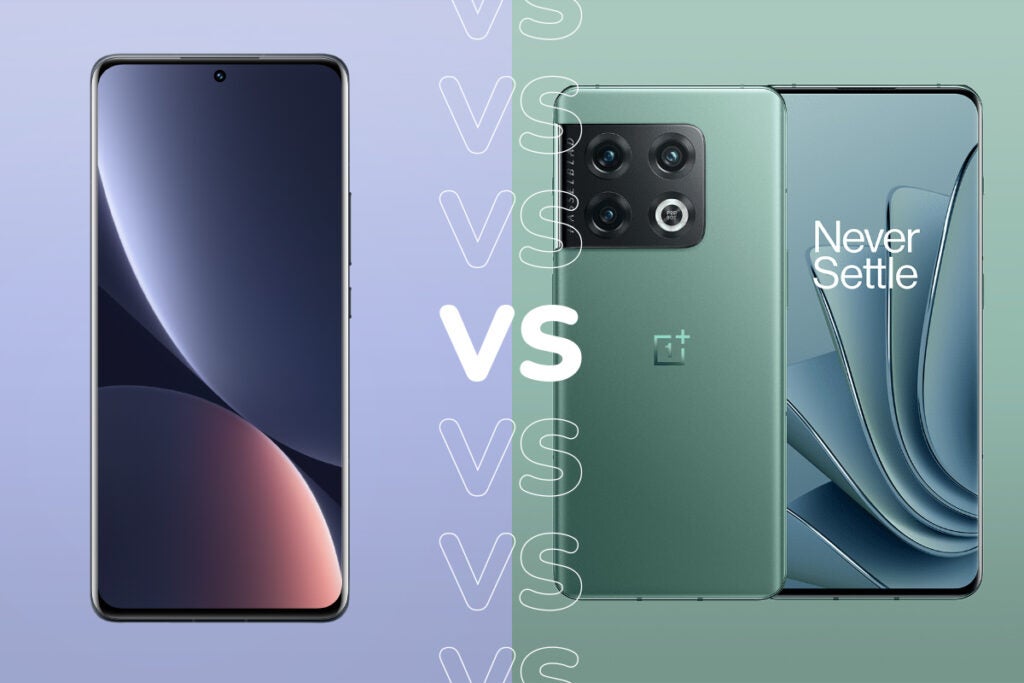 Xiaomi recently unveiled its newest flagship, the Xiaomi 12 Pro. But, how does it compare to OnePlus’s latest premium phone, the OnePlus 10 Pro?

One of the main draws to the 12 Pro is that it offers great performance, a stunning screen and a triple camera for less than key Android rivals, such as the Samsung Galaxy S22 Plus.

But, how does it fair against OnePlus’ high-end device. Read on to discover all the major differences and the similarities between the two smartphones.

It’s important to bear in mind that we’ve only spend a brief amount of time with each device at this point, so some areas like the battery and performance are harder to judge. We’ll be updating this comparison when we’ve spent enough time with each device to share our final verdict on each.

The OnePlus 10 Pro launched in China back in January, and was eventually confirmed to be getting a European release too, though we don’t know when exactly it’ll launch in the UK at this point.

Both the Xiaomi 12 Pro have smooth, curved designs and 6.7-inch AMOLED displays with 120Hz refresh rates.

The Xiaomi has a matte finish and rounded edges that come together to form a relatively understated design. It isn’t prone to picking up fingerprints and the camera protrudes slightly, but doesn’t look obnoxious as some of its rivals do. It comes in Grey, Purple and Blue colours.

The OnePlus also features curved edges and a matte finish, though the green version has a slight texture to it. The camera module is much larger than that on the Xiaomi, which won’t be to everyone’s tastes but the phone isn’t ugly by any means. The phone comes in Volcanic Black and Emerald Forest green finishes.

The Xiaomi has a 6.73-inch AMOLED DotDisplay with a 3200 x 1440 resolution and an aspect ratio of 20:9. It has a dynamic refresh rate of 120Hz, a 480Hz touch sampling rate and support for Dolby Vision and HDR 10+. The screen is capable of hitting 1500 nits at peak brightness and we found it to be bright, smooth and sharp.

There’s also a 32-megapixel punch-hole camera in the centre of the display for selfies and support for 8K video recording on the rear of the phone.

We found the cameras looked to produce natural shots in daylight across all three rear sensors, but would need to test them ourselves before offering our final verdict in our full review of the phone.

Like the Xiaomi, there’s also a 32-megapixel punch-hole camera in the top-left corner of the screen, along with support for 8K video.

The ultra-wide angle sensor is particularly interesting here, as it’s up to four times wider than the ultra-wide lenses on most rival smartphones. This makes it possible to fit more into the frame. The Hasselblad partnership, meanwhile, seems to be mostly software-focused, offering colour calibration and an orange shutter going back to the brand.

As far as performance goes, both the Xiaomi and the OnePlus are powered by the same chipset – Qualcomm’s flagship Snapdragon 8 Gen 1 with Adreno graphics. Both phones also pack 8/12GB of RAM and 128/256GB of storage, though the OnePlus also includes a 512GB option.

Both phones also run on Android 12. How it looks will differ slightly as the Xiaomi uses MIUI 13, while the OnePlus runs on ColorOS 12.1.

The Xiaomi 12 Pro packs quad speakers with support for Dolby Atmos and SOUND BY Harman Kardon, while the OnePlus features stereo speakers. Neither phone has a 3.5mm headphone jack.

Both phones feature large batteries. The Xiaomi packs a 4600 mAh battery with support for 120W Xiaomi HyperCharge wired fast charging, 50W wireless turbo charging and 10W reverse wireless charging for when you want to juice up your earbuds or other wireless chargeable accessories. The phone also includes Xiaomi AdaptiveCharge.

The OnePlus takes advantage of an even bigger 5000 mAh battery, along with 80W SuperVOOC Flash Charge fast charging support, 50W AirVOOC Wireless Flash Charge and support for reverse wireless charging. The company made the strange decision to switch from USB-C to USB-A charging on the Chinese version, so we’ll have to see if the same happens to the UK models.

You can see a full comparison of the specs in the table below:

There are many similarities between the two flagships, including their 6.7-inch AMOLED displays, their 120Hz refresh rates, their triple rear cameras and their matching Snapdragon chipsets.

The Xiaomi 12 Pro has a higher peak brightness and a higher touch sampling rate. It also has a higher megapixel count across its three cameras and includes quad speakers with Harman Kardon sound. Finally, it packs faster fast charging speeds.

However, we’ll need to spend more time with each device to decide for sure which one impresses us more. You’ll have to check back when we publish our full reviews for our final verdicts.

Realme set to launch the world's fastest-charging smartphone this month