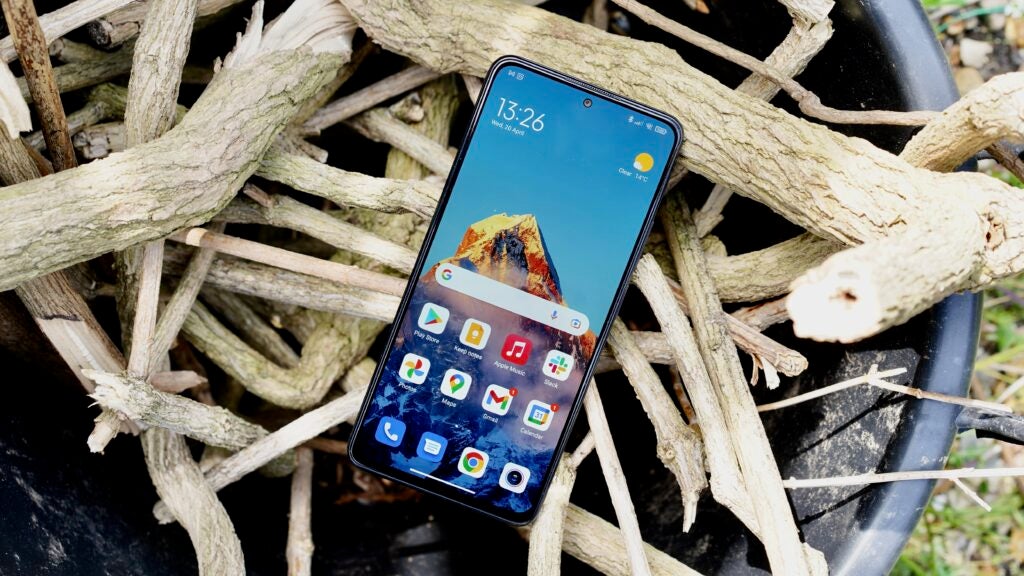 The Redmi Note 11 Pro Plus 5G packs a fine display, a classy design, and staggeringly rapid charging into a sub-£400 package. Camera and performance are solid rather than spectacular, but that’s more than enough to make this one of the better phones in its class.

Impressive display techThere’s an OLED display with bright colours and deep blacks, along with a smooth 120Hz refresh rate

Xiaomi risks appearing to parody itself with the Redmi Note 11 Pro Plus 5G. Already borderline comical is just how many cheap phones it’s rolled out of late under its Redmi value brand, not to mention its separate (yet increasingly similar) Poco venture.

While we joke about Xiaomi’s budget bombardment, there’s no denying that this is another extremely competent lower-mid-range phone offering an impressively complete smartphone experience.

You get the same boxy, straight-edged design that stands in contrast to last year’s curvaceous Redmi Note 10 Pro. It’s a fractionally thicker phone at 8.3mm, and it’s also 2g heavier at 204g, but those are very minor differences.

We’re still fans of Xiaomi’s choice of materials, with a glass rear cover lending a sense of class to what is still, technically, a cheap phone. There’s a nice silky sheen to it, both in terms of look and feel.

That flat frame is made of plastic, but the phone generally feels quite glassy to hold, and there’s no creak or flex to speak of. Meanwhile, an IP53 rating will be good for holding off any rain showers.

The reason the Redmi Note 11 Pro Plus 5G is slightly thicker than its sibling can be at least partly explained by the design of its camera module. Gone is the two-stepped design of the non-Plus, with its main 108-megapixel lens protruding further from the rest of an already prominent camera module. Instead, Xiaomi has thickened the whole phone and gone with a single-height camera mounting.

This arguably makes the Redmi Note 11 Pro Plus 5G slightly less distinctive than its sibling, but it’s also more practical and less fussy as a result.

Talking of which, the bundled Mi Remote app lets you use the phone as a substitute for your TV or Hi-Fi control.

But back to those speakers for a second. Once again, they’re particularly loud and clear, especially for a phone of this price. Xiaomi really does rule the roost when it comes to solid sound on a budget.

There’s been literally no change on the display front, which suits just fine. This was arguably the best thing about the Redmi Note 11 Pro 5G, and it’s at least one of the best things about the Pro Plus 5G.

Together with Xiaomi’s flexible display settings, you can make this screen look as vibrant or as natural as you like, within reason. No, it isn’t right up there with the top flagships, but it does a darned good impression of them.

Naturally, the headliner here is that 108-megapixel main camera, which is also the same sensor that found its way into last year’s Note 10 Pro 5G. Shots captured with it are decent, featuring strong detail and a reasonably natural colour palette – provided you leave the AI scene selector alone. It’s off by default, which is as it should be in all but the murkiest conditions. Turning it on will brighten your shots and imbue them with more Insta-worthy pop, but they’ll also blow out highlights and make things look a little false.

Once again, Night mode proves pretty unremarkable. Don’t let that flagship-seeming megapixel count fool you; this is still a cheap phone, and as such you’ll find plenty of noise in those low-light shots. Still, Xiaomi’s algorithms don’t get too aggressive with the brightening effect, so everything has a reasonably natural tone.

All in all, the Note 11 Pro Plus 5G’s main camera isn’t in the same league as the Realme 9 Pro Plus 5G or the OnePlus Nord 2, despite the surfeit of pixels.

The 8-megapixel ultra-wide camera is serviceable, but we continue to be a tad disappointed that it’s regressed from the 16-megapixel unit that came with the Note 10 Pro 5G. Shots taken with this aren’t bad at all, but there’s an obvious shortfall in detail.

The 16MP selfie camera is nothing to write home about. It’s a little washed out, and it struggles a little in HDR situations, blowing out highlights; but it’s far from a write-off.

While the new MediaTek Dimensity 920 5G chip doesn’t offer a night and day improvement over the Snapdragon 695 5G, it’s undoubtedly faster in every way. This is the same chip that powers the Realme 9 Pro Plus.

Like that phone, you’re looking at a smooth runner that’s more than capable of justifying hitting that 120Hz display mode as soon as you fire it up for the first time. Gaming performance is competent rather than impressive, with Genshin Impact returning a playable frame rate (with the odd stutter), even once you’ve bumped it up from the default Low graphical setting to Medium.

An average Geekbech 5 multi-core score of 2203 represents a 10% boost over the Redmi Note 11 Pro 5G. That reflects a modest yet clear bump in CPU power.

The margin is much bigger when it comes to the GPU, with a 3DMark Wild Life score of 1963 representing a 50% improvement over the Note 11 Pro 5G. Elsewhere, a score of  3875 in the more demanding Sling Shot Extreme test represents a 35% boost.

Of course, phones such as this and the Realme 9 Pro Plus are still in the slightly awkward position of being soundly trounced by last year’s Poco F3. But compromises have obviously been reached to squeeze in some headline features elsewhere.

Just as crucially as this performance boost – perhaps even more so – is the fact that this chip doesn’t lead to the media playback issues we had with the Redmi Note 11 Pro 5G. YouTube videos support HDR playback, for example.

As we discussed in the previous section, the Dimensity 920 5G also enables a far more competitive suite of video modes in the Note 11 Pro Plus 5G, including 4K support and higher frame rates in 1080p and 720p.

Besides this all-round superior SoC, the Redmi Note 11 Pro Plus 5G also provides higher storage options – 128GB or 256GB rather than 64GB or 128GB.

One thing that remains defiantly consistent across all Xiaomi brands is the use of MIUI. The company’s custom Android UI is just as gaudy and overstuffed here as it is in the Xiaomi 12 Pro or the Poco X4 Pro.

You get plenty of unwanted extra apps, both first and third party, and it runs on top of a fundamentally outdated version of Google’s mobile OS in Android 11.

This latest version of MIUI can throw up the odd random bug, which we’ve found a number of times across the extended Xiaomi range. In this case, I experienced a weird bug that saw a newly selected pre-installed wallpaper zooming right in on the image. This was fixed with a restart, but it’s indicative of an imperfect UI.

In both cases, I should note, I had set the screen refresh rate to the more demanding 120Hz. If left in its default 60Hz state, I could foresee this being a genuine two-day phone with moderate to heavy use.

Another thing that mitigates this smaller battery is the Redmi Note 11 Pro Plus 5G’s headline feature: a 120W charger that can get you from 0 to 100% in an advertised 15 minutes. In my experience, having run the phone down to empty, it was more like 20 minutes. But that’s still incredibly swift, and puts most flagship phones to shame.

With this meaty brick to hand, you could top your phone up during a coffee or bathroom break, and it would likely be good for the day. It’s a potential game-changer, even compared to the Redmi Note 11 Pro 5G’s impressive 67W provision.

You want the fastest-charging phone for less than £400 The Redmi Note 11 Pro Plus 5G packs in a 120W charger, which will get you from absolute zero to full in 20 minutes. That’s better than most flagship phones

You want the best camera for the money 108 megapixels might sound special, but the Redmi Note 11 Pro Plus 5G’s main camera falls short of the 50-megapixel camera found in the Realme 9 Pro Plus.

Improved performance, a more complete camera offering (at least for video capturers), and extremely rapid charging are all welcome. Generally speaking, they’re worth the £50 premium, especially since the phone still comes in well under £400.

Alongside these embellishments, there’s much the same classy design and that crisp and fluid AMOLED display, both of which are a cut above much of the competition. There’s also that 108-megapixel main camera that’s solid rather than spectacular, despite that sky-high pixel count.

The similarly priced, pitched, and performative Realme 9 Pro Plus is the better package, with a slightly lower price and a far superior main camera. But if you want a bigger, more fluid display and more rapid charging, the Redmi Note 11 Pro Plus 5G might represent a better buy for you.

Tested as main phone for a week

All camera modes tested in a variety of situations

Is the Xiaomi Redmi Note 11 Pro Plus 5G waterproof? It comes with IP53 water-resistance, a basic form of waterproofing that keeps the phone safe in the rain. What does the Plus version have over the regular Note 11 Pro? Improved performance, a more complete camera offering (at least for video capturers), and extremely rapid charging.

OLED
OLED stands for Organic Light Emitting Diode. It’s a display made up of self emissive pixels, each of which can create its own light. A bright pixel can sit next to a dark pixel to help create deep black levels and high contrast beyond that of traditional displays. The lack of a backlight also means these displays can be thinner than other types of TVs.

Offering faster download and upload speeds when compared to 4G. Great for game streaming and HDR video playback. Not supported everywhere yet and speeds vary wildly.

This iPhone 11 SIM deal is out of this world